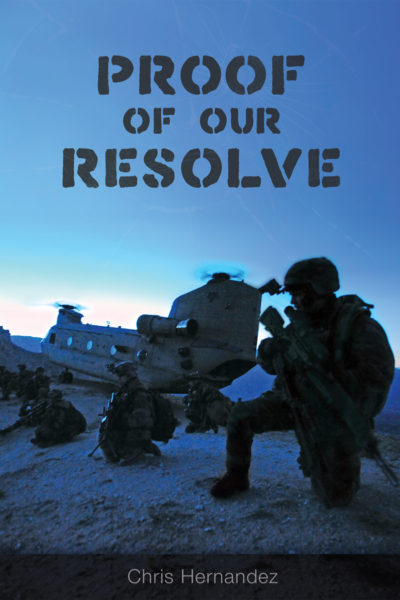 Proof of Our Resolve

“Proof of Our Resolve” is a novel about a Texas Army National Guard infantry platoon deployed to Afghanistan. This book attempts to convey some of the experiences of soldiers serving in Afghanistan through a fictional platform. The characters are representative of and much like the Soldiers and Marines one would find in a combat unit. The story’s environment and tactical operations are as close to real as possible.

Jerry Nunez came home from Afghanistan, turned the war off and went back to life as a cop. But when Afghanistan’s brutality finds its way onto the streets of Houston, Jerry once again has to face a war he thought he had left in his past.

Chris HernandezAuthor
Chris Hernandez is a 23 year police officer, former Marine and retired National Guard soldier with over 25 years of military service. He is a combat veteran of Iraq and Afghanistan and also served 18 months as a United Nations police officer in Kosovo. He writes for BreachBangClear.com and has published three military fiction novels Proof of Our Resolve, Line in the Valley, and Safe From the War through Tactical16 Publishing.

Chris is the Author of Proof of our Resolve, Line in the Valley and Safe From War